Kitchen Gardens, Inc. has a story to tell.

It is the same story so many small businesses have about their history – about being in the right time and the right place, about seeing a niche, about being “hungry” and ready to try something new!

So here it goes… 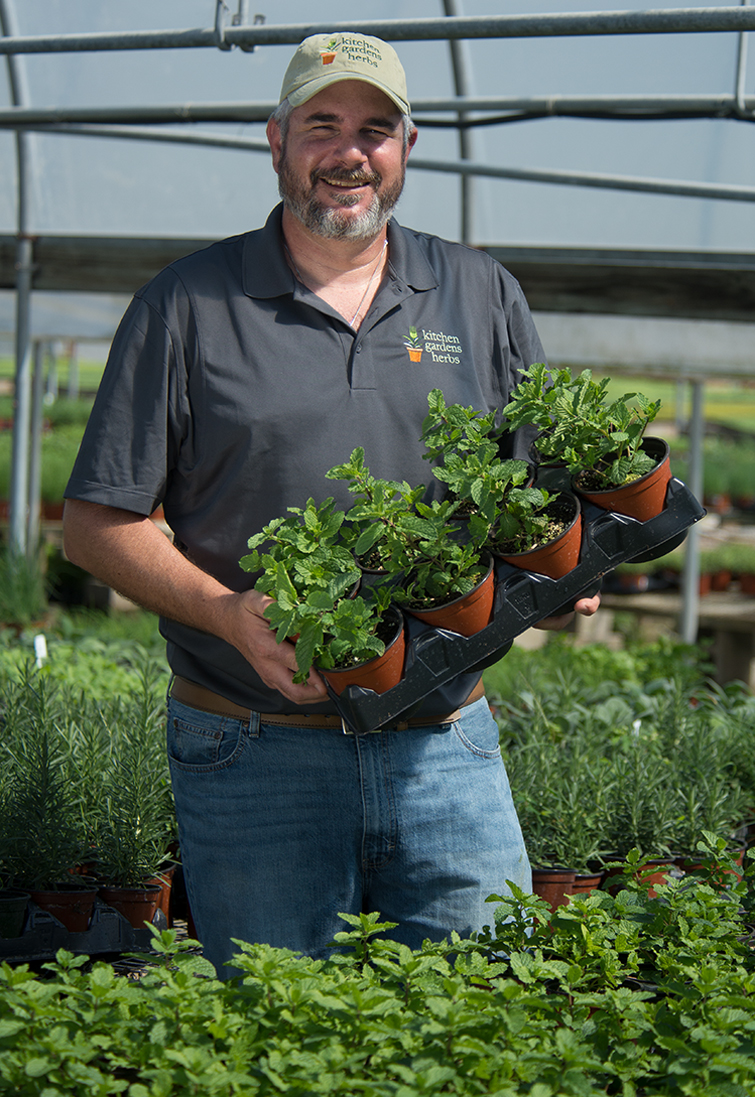 Bill and Chris Maxwell
moved to Florida in 1972

Bill had attended the University of Miami but moved back to the Chicago area after college. He became a social worker where he met Chris also a social worker. For a lark, they moved to Florida and ended up staying. Bill, who’s only experience in horticulture included a stint in San Diego doing odd job landscaping got a job through the FL state employment agency working for a garden center in Miami. Bill’s major in college was Spanish so he could put that to use in Miami as the garden store manager.

He loved the plant business, and became self-taught on foliage and landscape plants. When they moved to Naples he continued to work in the horticultural business. A business customer who worked at Publix Supermarkets mentioned to Bill that Publix was buying their potted herbs out of CA and that there might be an opportunity.

The rest, so they say “is history”. Bill jumped at the chance. He was at a dead end job and they now had a baby. They had already purchased 5 acres in Naples and had been growing foliage plants on the side. He experimented with potted herbs. He noticed that the potted herbs coming in from CA had only 1 or 2 seeds per pot.

In a grocery store setting the customer might like to have enough basil or parsley for a whole recipe not just a few leaves. He started “clump” sowing in a 4 inch pot. That was the change that sold the product.

They experimented out of the Naples Publix store (at that time 1 out of only 2 Publix stores in Naples) and what a success. Then he grew enough potted herbs to give the Lakeland buying office a chance to experiment. 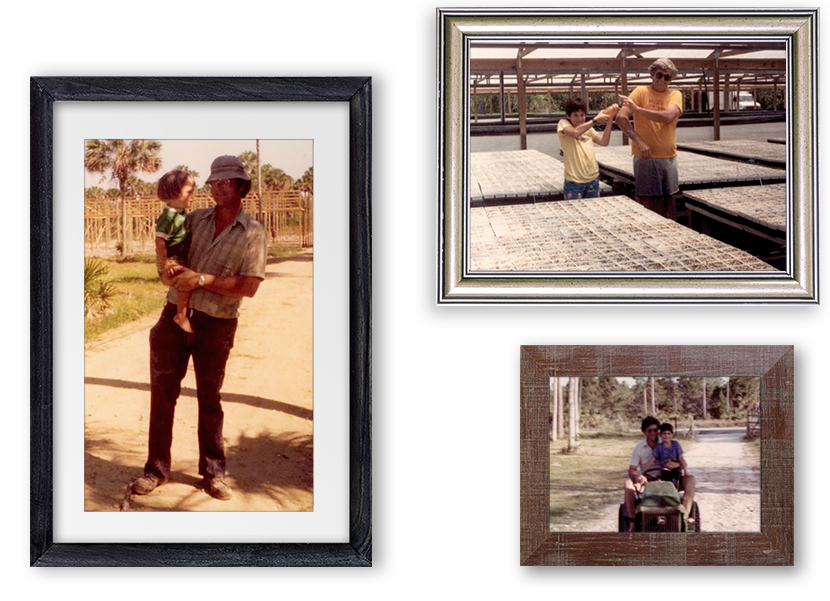 Chris was working at the business in the background. She helped with the physical work but spent more time on the branding of the product. She came up with the name Kitchen Gardens, a term used in colonial America, for small culinary gardens close to the kitchen door. She was also doing the bookkeeping. They had gone out on a limb financially borrowing money to get started. Every dime spent was important. Every mistake made in growing and experimenting was costly. They built a house on the nursery property so that they could dedicate more time to the business. Both of their children were involved and worked at the business as they grew up.

Publix Lakeland division became their first customer. Bill bought a truck and started adding various nursery and garden centers. He knew the Miami area quite well and was able to sell right out of the truck. They started getting repeat orders and their business grew. Then one day he stopped at a new chain store that had opened up in the Miami area, Home Depot. They had a huge garden area. Again he sold right off the truck. The home improvement centers were just starting. He got the name of a couple more of the Home Depots scattered around Miami and added them to a growing list of customers. As the Publix Lakeland account grew they asked him to sell to the Miami distribution center.

The business grew, and more varieties of herbs were added. At that time they were using a yellow 4 inch pot for immediate recognition. It worked. They had custom tags printed up with recipes and growing instructions. Another truck was added. But most important they could afford to hire a couple of employees to help with the work load. 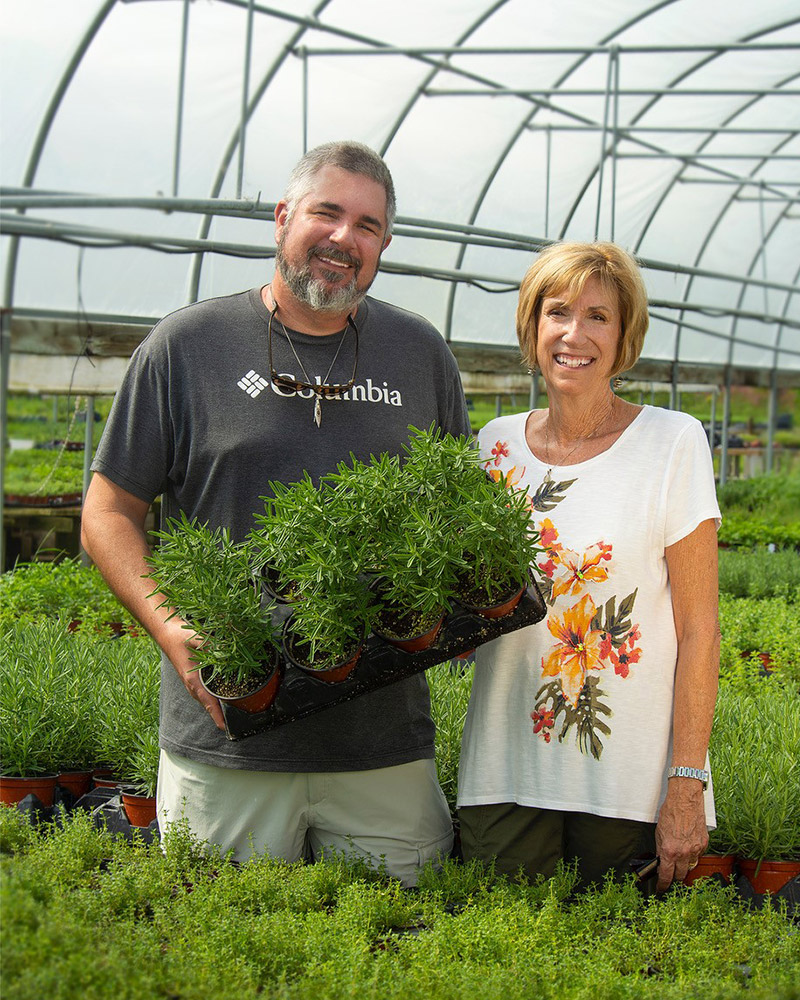 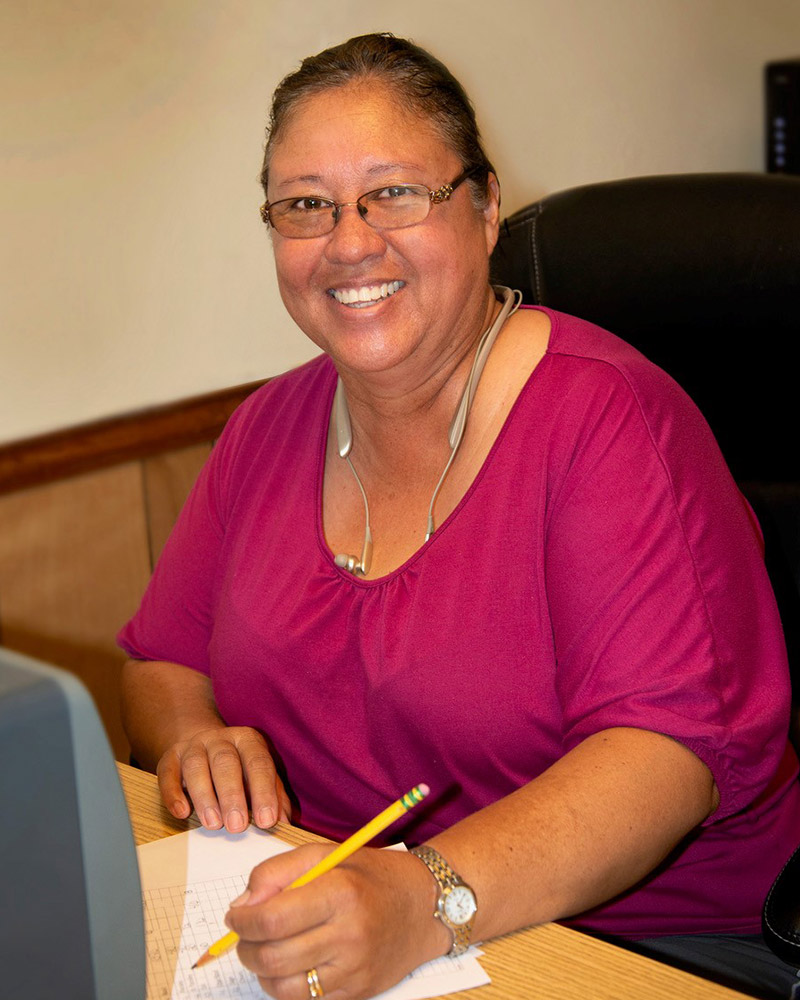 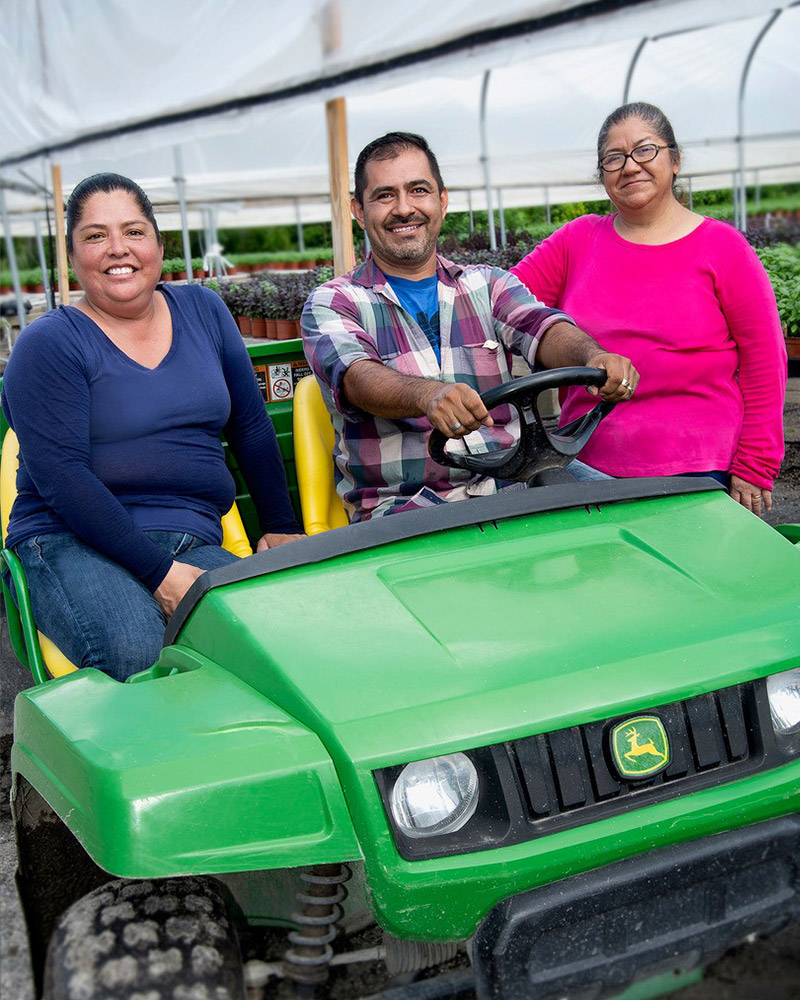 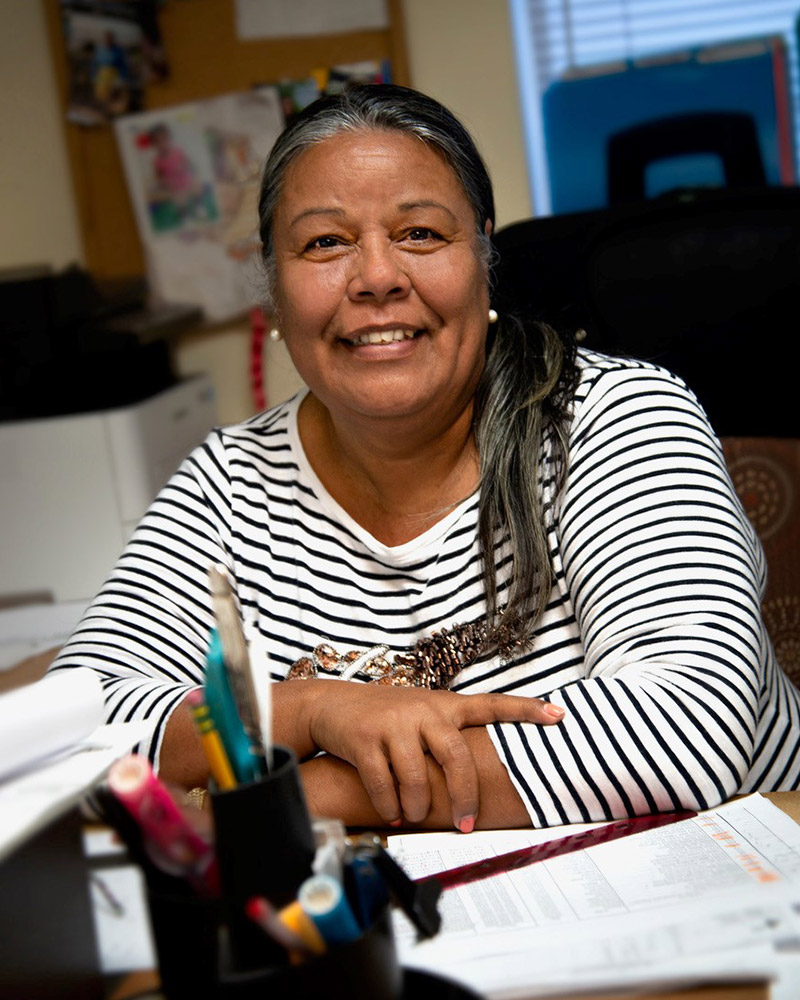 A business is only as good as
the employees working there.

The company has had a remarkable group of employees who treated the business like their own. Most of the work done at Kitchen Gardens is done by hand – the watering, the seed sowing, the packing, tagging, etc. Agriculture never closes its doors. It needs people working every day of the week. With 20 plus employees now involved in the business dedication is needed. Kitchen Gardens has always promoted from within.

Because there are many female workers there has always been an attempt to work with employees and their families. If someone needs to be off to take care of a sick child someone else covers for them. They have provided health insurance plans and a retirement program. At this time there are 4 employees who have been with the company for 25 years or more. There are several that are getting close to 20 years. 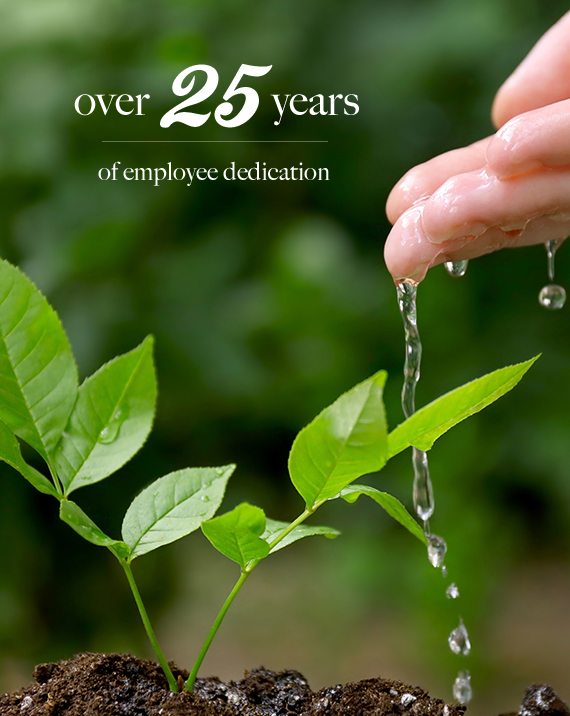 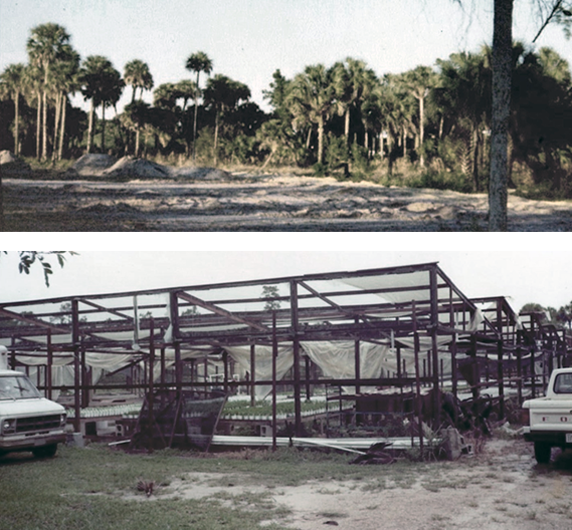 Hurricane Wilma came through in 2005 and took the better part of that building down. The remainder was torn down. Today there are 25 new modern greenhouse buildings standing. Five adjoining acres purchased several years back have allowed the business to expand.

In 1992 Bill Maxwell passed away from cancer. His wife, Chris, continued the business along with a very loyal group of employees. In 2002, son Bill Maxwell came back to Naples and now runs the family business.

Through the years there have been many
ups and downs like all business.

The customer base has changed from time to time. What has not changed is the product itself - fresh potted herbs. Because of the personal attention given to the product by the employees and owners the business has surpassed the 40 year mark. There have been hurricanes, freezes, plant diseases, etc. that have made life in this agricultural business very difficult but love of what they have produced and pride in the history of this business has made this company live on. 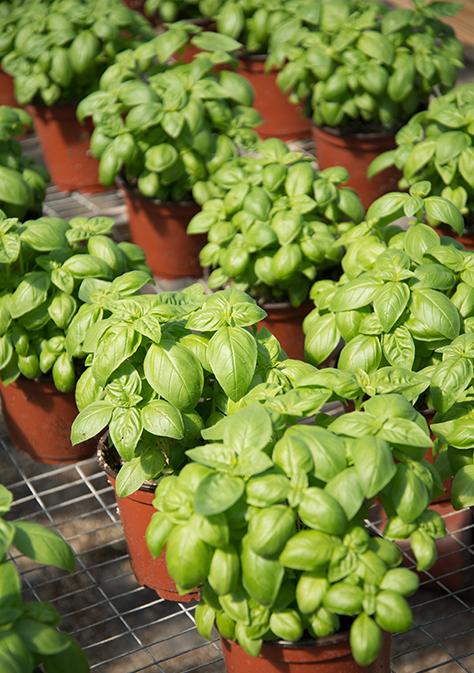 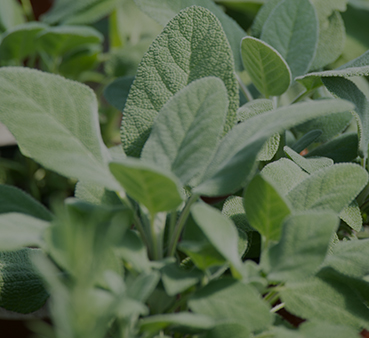